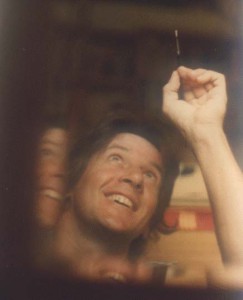 Graeme’s art career started some time around 1949 with a drawing of a cow. (His Grandfather added some legs). A few years later, Graeme is still working on various projects.

Graeme started work in 1961 with a temporary job for the post office, as an assistant to the draughtsmen. After his School Certificate results were published in January 1962, he started work with Cliff Press’s subsidiary offset lithography company Photolithox Printing in Hastings NZ. A week before his 17th birthday Graeme left home and went to Wellington NZ to work for Joseph Churchward Advertising Art Studio. Many times he would work right through the night helping with the production of hand-drawn illustrations and lettering. Afterwards he worked for Lintas, J Inglis Wright (the largest advertising agency in NZ at the time, before travelling to Sydney. A few days after arriving he started work with Rodgers Holland and Everingham who were the top creative agency in Australia at the time. Afterwards, Graeme worked two years with David Heweston Art Studio. Graeme travelled to New Guinea in late 1969 accompanying David Heweston, Jon Waddy, and David’s wife Sue, on an expedition up the Sepik River to take photographs..In New Guinea, Graeme worked for Territory Airlines, Steamshios Trading Co, Narime Hotel in Vanimo and drew and painted extensively. He did portraiture in Madang, Wewak, and lived and painted in the Ninigo and Hermit Islands 200 miles north of New Guinea in the Bismarck Sea.

In September 1973 Graeme left New Guinea and worked briefly for Cliff Batt at Yungaburra, did some signwriting at Lake Barrine, before settling in Cairns. His love of the tropics, combined with the desire to do fine art led to various work experiences, including commissions in charcoal, pastel and oil portraiture and even sculpture (with Hans Nielsen) Graeme worked with the Workshops Gallery, Upstairs Gallery and had some fine art exhibitions. He was well known for his charcoal portraits which he would do from life. He taught outdoor painting classes. He collaborated with Hans Nielsen the sculptor, designing three sculptures including the pioneer group for the Cairns Lawn Park Cemetery. Graeme spent many years doing T Shirts designs for the T Shirt Factory Cairns, Stover Art and also Tropic City Art and T Shirt Advertising Clifton Beach. He was commissioned to do a large mural for the opening of the Cairns International airport in 1984.

Graeme became interested in computers in 1981 and bought a ZX81. (with 16Kb RAM!) He did illustrations for various businesses in the Cairns region with many crocodiles. palm trees, marlins, and of course frangipanis and hibiscus illustrations. He has concentrated on landscape paintings, figures, faces, especially of aboriginal and Torres Straits Islander portrayals. He has taught Art from 2002 to 2006, and worked as a graphic artist from 2006 to 2012. He is still involved with freelance illustration, fine art and portraiture.

http://portraits.baileynet.com.au (an online gallery of portraits by Graeme Bailey)